When I was in kindergarten the teacher posed a question to all the girls in the class: when we grew up did we we wanted to be mommies or did we want to work? I remember even at the time thinking the question was ridiculous, and if my memory serves, I was the only one who said both. My mom was a mom, obviously, and she worked. Case closed. That was 1980 and it seems odd to think that we were asked that question in that era. After all, women had been “having it all” for years at that point. Why did it even come up? Why were the boys not asked whether they wanted to be daddies or work? But I didn't give working and having kids another thought for 30 years.

I never felt restrained by my gender while I was growing up. My grades were good and that meant that I could be anything that I wanted to be, and my parents, bless them, told me that regularly. Not even when I started working did I feel restricted by being female – though it didn't hurt that I chose a profession few men chose (though that seems to be changing). Occasionally, while working in a large corporate environment, I would lament the lack of women in the upper echelons; but with no lofty aspirations to climb that ladder myself, it wasn't a major issue for me. When I left my first husband, I thought momentarily that I was throwing away my chance at having a baby, made all the more prominent by the timely birth of my nephew. But I quickly made the decision that if I didn't meet anyone by a certain age, I’d get pregnant and raise a child on my own — and with little more thought, I had a back-up plan. I never called this “having it all,” it was just what I was going to do. It was what I had always intended on doing. I wanted to be a mother, and you work, everyone works, hopefully, as I do, at something you’re good at and you enjoy. Period.

However, I did meet someone, we fell in love and we both wanted the same thing. No need for that back-up plan after all. And right after our wedding, we started trying to start a family. Even during pregnancy, I didn't think too much about “having it all.” It wasn't until I actually became a mother that I thought any more about it. I suppose by my non-definition, I have it all now. I'm a working mother with partner I love. I have a house. I have a car. I have supportive extended family. But, “having it all” means that I'm exhausted all the time. I barely get through the day. I'm broke and in debt. My house is a constant disaster, and I live in fear that someone will decide to “pop in” (though, of course, I will hide when they knock). I'm bored with my now repetitive job and wish I could be with my daughter more. I fight with my husband over petty things because I'm tired and feel overworked. I rarely see or speak with my friends. I have no sex life. I let my daughter watch too much TV because sometimes I just need to get the dishes done, because there aren't any clean ones. I sometimes let bad behaviours fester because I'm too tired to argue or stay up all night enforcing good ones. I’ve stopped putting on make-up and blow drying my hair in the morning because I just don’t have time. I'm overweight because I haven’t got the energy or time to exercise, or the desire to care. I have no memory of the last time I had a shower or a pee by myself. I have no memory at all. 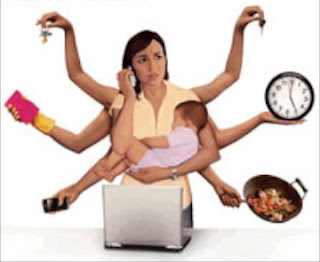 I'm in complete awe of single moms and families with more than one child. I wouldn't change the mom part of my equation for anything. But — and the feminist in me hates me for thinking and writing this —if I could, I’d give up work in a second, and only work part time once my daughter is in school. Not because I think my daughter will grow up horribly for not having a mom around all the time. But because of the time I'm missing with her; the time I'm working to pay someone else to have with her. Because, frankly, she is the loveliest, most wonderful person I’ve ever met. And it would be nice to have a clean house occasionally and eat dinner as a family.

I’ve now changed my definition of “having it all,” or maybe now I just have one where I didn't before —it’s the ability to choose what you do, regardless of what your individual choice might be. For me, that’s “having it all.” And sadly, that revolves around money in my case, simply because I don’t have enough. But I’ve got a plan and I'm working on it. And maybe someday soon, I’ll be able to choose. 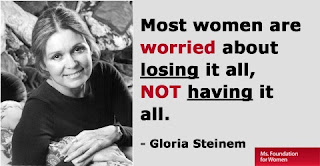